More and more companies are recognising that gathering continuous feedback is the best method for engaging staff, diagnosing problems, and developing timely solutions

Talk to any company boss, and chances are that they’ll mention the importance of listening to their employees and acting upon the feedback they receive. After all, it’s not exactly rocket science that “happy teams drive company growth”.

Where there’s less agreement, perhaps, is on what form that listening should take. Traditionally, companies used large-scale, formal employee surveys, often just once a year – and recent data from Gartner suggests that, even in 2019, nearly three quarters still do.

Others, however, have argued that “the annual employee engagement survey is dead”, and that a year-on-year approach that might work for financial metrics is ill-suited for more qualitative HR insights and trends.

Certainly, the clear direction of travel is towards companies embracing a more continuous approach to employee feedback through the use of short and regular pulse surveys. This is widely seen as a more dynamic, accurate and cost-effective way of addressing workplace issues as they occur.

Indeed, since all of us, as individuals, continually harness the power of technology and soak up and share information in real time, there is something rather quaint – and odd – about doing that just once a year in the work environment.

What you get out of any survey is only ever as good as the questions being asked. Apart from focusing on the topics that matter to the organisation and its people, it’s crucial to get the question wording right to avoid ambiguity or bias.

Though pulse surveys can still fall foul of human error, the implications are less severe than if an ill-prepared once-a-year survey contains unfortunate mistakes. Also, the question design interface of a continuous survey tool like Surveyapp, featuring a range of trusted question formats, makes it easier to avoid such errors in the first place.

Even if a pulse survey brings up issues that you hadn’t anticipated, its short, regular format means that questions can easily be reworked and asked again in a future round.

With any kind of survey, one of the biggest challenges can be “form fatigue”, and getting people to respond at all. The time to complete an annual survey, for example, might be measured in hours rather than minutes, which is no easy sell when employees are time poor. Various sources suggest that the response rate for such surveys can be as low as 30% or 40%, which then raises questions over the representativeness of those taking part and their views.

Unlike lengthy annual surveys – which typically cover a large number of topics – pulse surveys are short, timely and focused, making it more likely that employees will complete them, especially if bosses take the time to explain the purpose and value of the exercise.

Indeed, by posing just a handful of specific questions, in a survey taking no more than five minutes, it’s not unreasonable to ask employees to complete multiple surveys over the course of a year – particularly if the process is user friendly, simple and fun. Reflecting the ways in which employees communicate with each other in their daily lives, pulse surveys should always be “social, visual and mobile-friendly”, and ideally be responsive by asking follow-up questions based on previous answers. 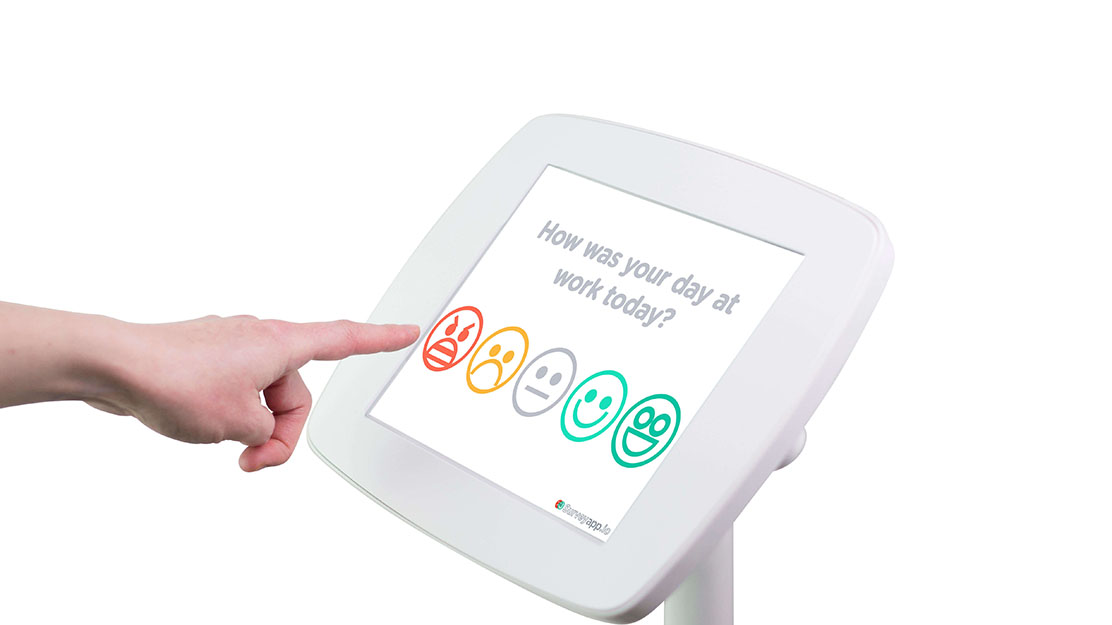 A tool like Surveyapp not only ticks all these boxes, but also makes it easy to reach your team using the channels that are most convenient for them – whether that’s responding to a survey right from their email inbox, or answering questions in the office via a survey terminal.

One of the biggest problems with annual surveys is that many respondents simply can’t remember all the issues that seemed important to them throughout the past year. Something significant from a few months ago might not get mentioned at all, even if the underlying issue remains unresolved. Equally, a relatively minor concern can be amplified if it happens to coincide with when the annual survey arrives.

Add in the fact that employees may deliberately answer questions incorrectly – just to get through the survey as quickly as possible – and there’s a real danger that employers end up with a mishmash of fairly useless data.

Therefore, the quality of the insights to be gained through an annual survey relies on several unlikely premises: that the employee is motivated enough to complete the entire survey; that respondents are able or willing to answer the questions accurately, all the way through to the end; and that the snapshot in time in which the survey occurs is a fair reflection of the year as a whole.

Pulse surveys avoid these pitfalls by being short, simple, and in the moment. As one source rightly puts it, “What’s the point of acting on last year’s feedback when employees have something to say now?”

If it’s not bad enough for an annual survey to be asking about events that happened months ago, the time it takes to analyse and act upon the data can add yet another layer of delay.

An annual survey, among all employees at once, can produce simply too much data to process: what one writer has called “paralysis by analysis”. Furthermore, by the time it has been crunched and analysed, what employees were telling you several months ago – even assuming their responses were accurate in the first place – may well not reflect the current issues and mood in the business.

Worse still, if employees sense that nothing is happening with their responses, it may well be even harder to engage them next time.

In contrast, shorter pulse surveys – typically focused on a single topic – can make data processing more manageable, and speed up dissemination and action. Some employers still worry that they lack the analytics support for dealing with continuous surveys, yet many of today’s tools remove this barrier by having sophisticated and timely analysis and reporting built in.

Surveyapp’s dashboard, for instance, delivers employee feedback in real time, making it easy to rectify problems within hours, and to swiftly reassure staff that their concerns are being listened to and acted upon.

Perhaps the most obvious benefit of collecting continuous employee feedback is that it allows you to identify and fix the causes of staff unhappiness before those issues have a negative impact on the business.

A pulse survey is also more likely to pick up topical or seasonal issues that might get overlooked in a once-a-year questionnaire – but can still provide sentiment metrics throughout the year if you choose to repeat the same questions from time to time.

Equally, the flexibility of the quick and continuous survey approach allows you to gather feedback from targeted segments – such as particular business departments or locations – to identify any local issues that require extra attention.

In turn, by taking on board employee feedback continuously through the year, your in-depth annual surveys – if you still choose to have them – can focus on topics that are less time sensitive, such as baselines and deeper questions around company strategy and change.

As companies look to differentiate themselves, and promote employee engagement and wellbeing, effective surveys are not just a listening tool but also a means for promoting change and defining a brand. Facebook, for instance, has found – unintentionally – that its employee surveys are “a vehicle for changing behaviour”, because of how the questions being asked “prompt reflection” among respondents.

In contrast, get it wrong – with a survey that comes across a box-ticking exercise, rather than a genuine listening exercise – and the whole process can end up driving disengagement and negativity, rather than solving it.

In this situation, short, regular, engaging surveys are more likely to give both employees and employers food for thought – with the potential to prompt positive, meaningful and lasting change for the benefit of the business.